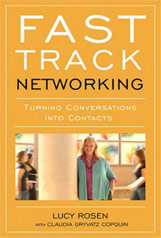 I co-authored Fast Track Networking: Turning Conversations into Contacts (Career Press, 2010) with Lucy Rosen, the “Queen of Networking.” Rosen runs a successful marketing and public relations firm with offices in New York and New Mexico, and is the founder of the national women’s networking group, Women on the Fast Track. The book offers readers an insider’s look into what works – and what doesn’t – when it comes to networking. In addition, it contains real-life networking success stories of leading business owners and entrepreneurs, highlighting how networking helped them in their careers.